My first use of origami was making Christmas cards last year.  See below:

The cards, I thought, were very successful. What I didn’t take into account was that with all the layers of folded paper, they turned out to be quite bulky.  And bulky post = higher cost of postage.  So, only one person got their origami card posted the rest were hand delivered or put in a parcel with a gift.

I will be running a children’s art and craft morning at Burnham library this Saturday and I’ve promised to do some origami with them (why did I do that???).  This ‘make’ will, I hope, hone my skills in folding paper so that I can appear to know what I’m doing on Saturday.

This is what you will need for the earrings:

Cut a square of paper about 4.5 cm square.  Like I mentioned above, I used scrapbooking paper which is double sided but you could use anything.

Fold the square along the diagonal, crease and cut with scissors so you have 2 triangles: 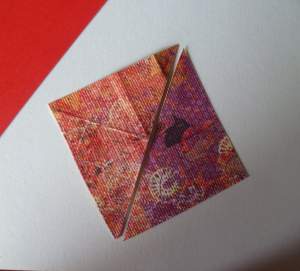 I will give instructions for one origami heart but if you would like 2 earrings you’d better make two of them.

Fold the triangle in half along the longest side:

Make a crisp crease along the triangle’s axis, then open out again and lay it in front of you with the long edge at the bottom.

Now fold the top point down to just over halfway down the middle crease.

Fold the other two points in so that the bottom edges are aligned with the middle crease. 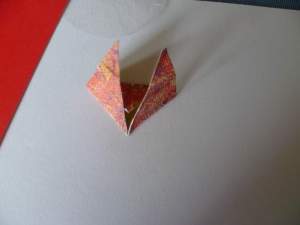 Flatten and make the creases sharp.

Turn the paper over.

Fold the points in so that the edges meet the line of paper below them:

Turn the piece over and fold in the 2 upper and 2 side points a little to round the shape out: 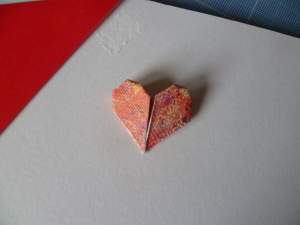 If you’ve had enough at this point you can stop and stick the hearts on a card, especially if you are reading this on February 13th and have forgotten to go to the shops.

Or…you can carry on to make earrings.

Make a hole in the heart with a fat needle just below the middle V. Open jump ring out, put it through the hole. Sometimes they are soft enough metal to do open with your fingers, if not, use the needle nosed pliers.

Thread the beads onto the headpin

Then using the round nosed pliers make a loop in the headpin at one end.

Snip the other end of the head pin leaving enough wire to make another loop. 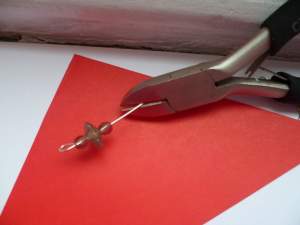 Attach one loop to the jump ring on the origami and the other to the fish hook ear wire and close the loops and ring so that they are tight. 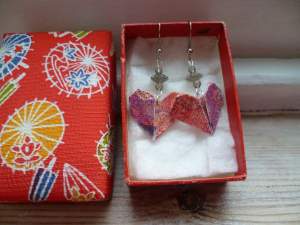 I hope you enjoyed this ‘make’.  Let me know what you think about it and how you get on if you decide to make some.