This week has been the busiest of the year for me. I was a bit worried that I wouldn’t get to my ‘make’ at all but then I realised that of course I was making something.  Sometime ago I agreed to run a craft morning at our library where we would be making scarecrows for a competition at our July 9 carnival.  We decided that we would make them totally out of recycled materials as this week is Eco-Week in our village.

I’ve been saving basket loads of recycled packaging and old cds for several months.  I really had no idea how I would be putting it all together but knew I’d find a way.

Thankfully, one of the rules of the competition is that the scarecrows are to be less than 2ft tall. I started off by filling a plastic carrier with some shredded paper to make a head.  I tied the head off with string then threaded the handles down the inside of a paper towel cardboard tube. Then, using some old fabric, I cut a circle with pinking shears and covered the head with this, again tying it off.  I used some old wool to make the hair and sewed it to the head.

Then I realised that this could be this week’s make and started taking pictures.

For the next step I added button eyes and nose. 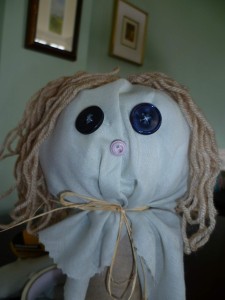 Now for the tricky part..how on earth to make the body?  Then I had a brainwave.  Jiffy bags seem to pile up in my office. They aren’t easy to recycle without either reusing or pulling apart to separate the plastic bubble bit from the paper outer.  So I chose one roughly the same height as the paper towel tube and cut it into the shape of a dress. 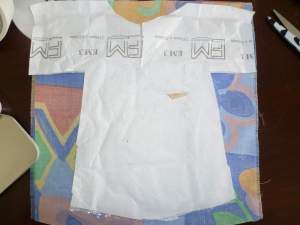 I used masking tape to tape the sides and under arms together and then cut two pieces of scrap fabric using it as a pattern.

I machine sewed these together at the sides and under arms and finished the sleeve and neck edges by hand.

Hmmm…how to get her to stand up?

Using one of the old cds, I cut out a same sized piece of card and then glued the card to the cd.

Then I cut several slits upward from the bottom of the cardboard tube and splayed them outwards. I glued these to the cardboard circle attached to the cd. Surprisingly she stood upright! 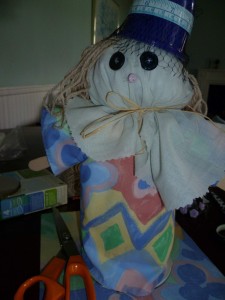 Ooops…nearly forgot to mention, I made her a hat out of a chocolate pudding container, an old measuring tape and some netting that a toy bat and ball came in.

Here is the final version.  I added some fabric flowers and a bag of sewing and knitting goodies to advertise our Sew, Knit and Natter group at the library. 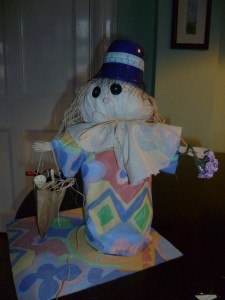 Several days later, she is still standing so I’ll be taking her down to the competition on Saturday morning. Wish me luck!