Yes, surprisingly we are a month in and I’m still making.  I had the idea for this make while I was with my regular Sew, Knit and Natter group at Burnham Library.  We had a great bunch of makers there on Saturday.  V showed us how to make paper (which could well be a future make here) and a few others were teaching a new recruit how to read a knitting pattern.

This week’s make is made almost totally out of stuff that would otherwise have been thrown out. Here is what you need.

The first step is to cut some long tapered strips from the magazine.  The top is about 1cm tapering on both sides to the narrowest point which is about 0.5 cm. Use the whole length of the page. 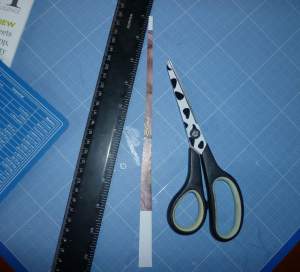 You can also do this with a ruler and pencil or if you get fed up with that (as I did) just do it by eye.  This part is fun because you can experiment with the colours.  The colour at the point of the strip will be the main colour of the bead.  I’ve tried, with this bracelet to make the beads roughly the colours of the rainbow.

Next step is to wind the strip of paper around the stick or knitting needle starting with the wide end as pictured below. 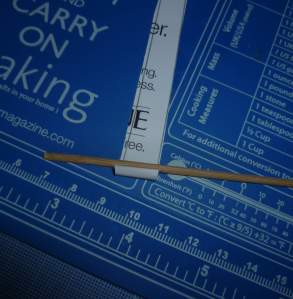 Try to keep the paper centred so that the narrow end ends up in the middle of the bead. Wrap the paper tightly and when you get to the point where there is just about 5cm left to roll then add a thin strip of PVA glue. 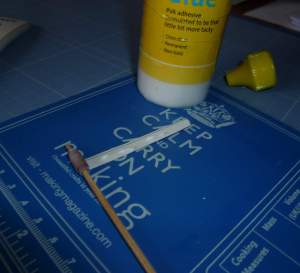 Wind the last 5cm around the stick.  It doesn’t matter if the glue oozes out and spreads onto the bead, it will dry clear and will also keep the bead nicely together.

Gently pull the bead off the end of the stick/needle. 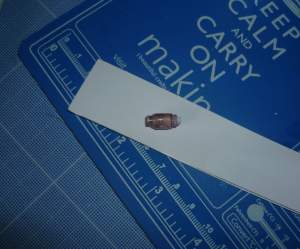 I made about 80 for this project.  It was a random number – the amount I could make while sitting in front of the television catching up on Gossip Girl and Waterloo Road!

I then decided I’d varnish them to make them a little more robust. (This is the part where I put the recycling bit to one side)

Daughter, S and little one were here when I decided to do this so, in order not to asphyxiate little one, I took the beads out to the porch with a piece of newspaper and a can of spray varnish.

Learning number one: Don’t expect paper to stay still outside on a windy day

Learning number two: Spraying paper beads with an aerosol sends them scattering to all corners of the porch.

Luckily I had a trusty box with me (recognise this monstrosity from my first make?) 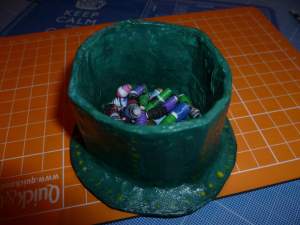 I sprayed the beads one layer at a time in this and it worked perfectly.  I’d imagine a small tupperware box would work just as well as long as you don’t want to use it for food again.

Next was to find something suitable on which to string the beads and I came across a piece of gold coloured elastic taken off a chocoloate box.  It is roughly 70 cm long. 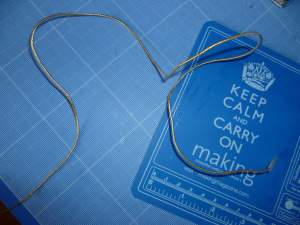 When the varnish is dry start stringing the beads.

I decided to string mine in a rainbow sequence.

Once the beads filled the string, I tied the ends of the elastic.  It can be worn as a bracelet or necklace and here it is: 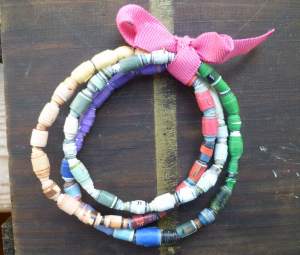